Skydiving vs. Paragliding: What's the Difference? 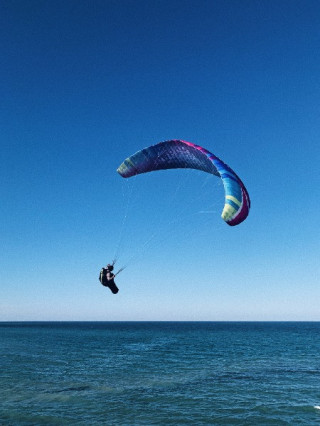 Skydiving and paragliding are some of the most popularly practiced air sports in the world. They outnumber base jumpers, hang gliders, and tunnel flyers by a huge margin. However, despite their popularity, the average person sometimes confuses the two. What's the difference between paragliding and skydiving? Paragliding is when you launch a gliding wing from a fixed object, typically a terrain feature. Skydiving is when you leap out of an aircraft and use a parachute to descend back to the ground. Here's a list of some of the key experiences that differentiate them:

Borrowed from French, the term "free flight" is used in paragliding to describe using your wing to fly from start to finish. In skydiving, you'll start off with bodyflight and transition into utilizing your parachute at pull time.

When paragliding, your harness is somewhat like a chair or a lounge, while your skydiving harness will have you hanging in a typical full-body climbing/hanging fashion. Each position is comfortable, providing they're well-fitted.

When comparing skydiving and paragliding, it's important to understand that paragliders can cover vast differences compared to a parachuter. Sometimes, paragliders will compete in cross-country-like activities to see who can fly the farthest, while parachuters savor the ability to perform experienced tricks and tumbles in the air as if gravity-defying gymnasts.

Although weather conditions are important to both paragliding and skydiving, it's much more important to track the weather when looking to go paragliding because of the distance traveled and the fact that the pilot is dependent on the wind conditions. Since parachutes are designed to descend, Regional weather factors don't play as significant a role when skydiving, making considerations much simpler.

Is Skydiving or Paragliding Better?

Both sports are very communal and have a dedicated following of athletes that live by their activity. In this sense, there is no one true option for which is "better" than the other; it all boils down to how you prefer to experience the clear blue skies.

If you're interested in going on an aerial adventure of your own, reach out to Gold Coast Skydiving today to learn more about our services!

The Benefits of Skydiving on Mental Health Can You Wear Glasses Or Contact Lenses While Skydiving? Skydiving vs Paragliding When you Skydive, Can you Breathe? Skydiving vs Hang Gliding
READY... JUMP! LET'S FLY!