Too Old to Skydive? Guess Again! 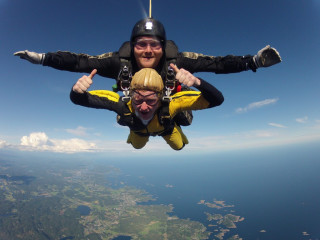 What About Me?
Remember the saying, "You're only as old as you feel"? Well, what if you don't feel old but your numerical age says otherwise? Does that mean that you can't do exhilarating things anymore like skydiving? Naturally, you would think that the answer to that question is yes. Well, you would think wrong!

Age Specifications
When it comes to skydiving there is an age requirement of 18 years old, but there is no age limit. You can fall out of the sky as an adult whenever you want! Take it from the brave woman who was in the Guinness World Record for the Oldest Woman Skydiver in the world. Her name is Dilys Price and she was an eighty-two year old adventurous spitfire. She made her first jump at the tender age of 54 and has jumped more than 1,000 times since then. You can actually find videos of her jumps on YouTube. There are also several clubs/groups that are out there with over-the-hill jumpers including SOS (Skydivers over Sixty) and the POPS (People over 'Phorty' Society). You can qualify to jump just as long as you can hold your bowels (for the sake of your co-jumper)! Of course, if you are an elderly jumper it would be wise to check-in with your doctor first before flying high. Someone who is reliant on an oxygen tank or who cannot walk without a walker might not be a good fit for this. The best fit for the elderly faller would be someone who has generally good health (physical and mental) and who actually wants to do it. Someone who can get over the jitters and take the plunge. There is a level of pushing through the fear to fly.

Take Action
So, does this sound like you? Do you think you could brave the plunge? We encourage you to do it! It's been said that if someone before me can do it, then I can do it too. Dilys Price has done it countless times before. Now it's your turn to join the club!